The Internet was designed to be resilient, so if one router goes down, another path can usually be found (unless it’s  your office router – then you can't reach anything). Every now and then (2-4 times per year in our experience), an important router – perhaps at a significant ISP – goes down, and a handful of our customers can’t get to their Moraware databases. Usually an issue resolves itself within 15 minutes, because any significant ISP works very hard to fix problems as quickly as possible.

If your Internet goes down frequently, switch to a competing ISP. Or better yet, get a “load balancing router,” and use two Internet providers simultaneously (this typically requires the help of an IT professional to setup correctly). Even simpler, setup a backup source of Internet like a wireless hotspot from your mobile provider that you can use from a laptop if your main Internet goes down.

What to Do if you cannot reach your Moraware software:

If you reach the login screen, it means our servers are working properly and the problem is somewhere between your office connection and our servers.

If you cannot access your Moraware database via your regular Internet connection or cellular connection, contact Moraware support.

To diagnose further, you can run a diagnostic program called a  trace route (tracert):

When the routers between your computer and our servers are working propertly, a tracert looks something like this: 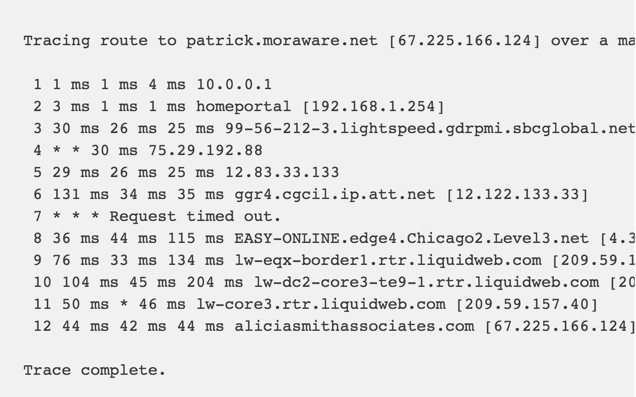 When things go wrong, you'll see a different result. Here’s a tracert that failed from our servers to a customer in Montreal a while back: 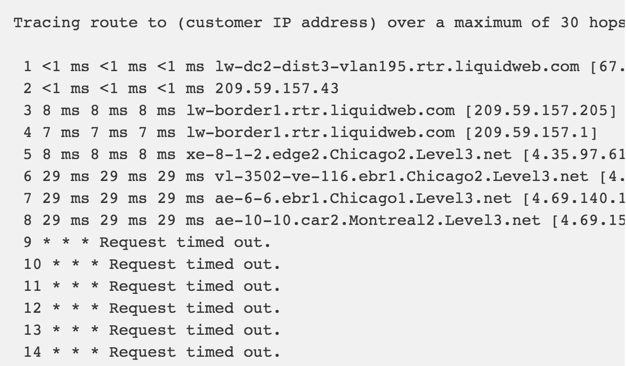 Note: This told us that there was something seriously wrong in the Montreal area – with a router neither of us had any control over – preventing us from getting to our customer or vice versa. It resolved itself within a few minutes.

Ah, but what about the fact that you can still reach Google or Bing or Yahoo or Amazon or some other popular website? These web companies don’t have “a few servers” – they have many  thousands of servers in several data centers placed strategically throughout the globe. If you can’t reach the “default” server for your location because of some network anomaly, the Internet will essentially try the next closest one until it finds one that works (that’s a gross oversimplification, but you get the general idea).

While we’ll never have as many data centers as the big sites mentioned above, we now have two separate data centers in different parts of the country. If there is indeed an Internet problem between your office and one of our data centers, moving your Moraware to the other data center typically resolves such issues. If you are having connectivity problems, let us know as quickly as possible so that we can take appropriate steps to a resolution.

There are proactive steps that you can take to help ensure that your own network is healthy, so that you can always get to your Moraware software. First and foremost,  use a high-quality Internet provider. From time to time, check your speed at a site like http://www.speedtest.net (be sure to click on the map and not an ad) to see if you’re getting close to what you’re paying for. If your measured speed is 80% of what your ISP publishes, that’s probably fine – if it’s 20%, that’s generally not – and note that downstream speed is often ten times faster than upstream.

Did this answer your question? Thanks for the feedback There was a problem submitting your feedback. Please try again later.